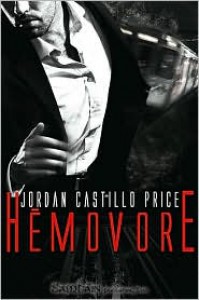 Read up to 60%, then quickly skimmed the rest.

Did I mention that I very rarely like vampire stories? Anyways, this is how Hemovore works: Mark Jensen is a 40 year old guy who works as an assistant to a famous vampire artist by the named Jonathan. Mark secretly has a crush on the sexy Hungarian vampire, but isn't even sure Jonathan is even gay. And on top of everything else, a relationship would be out of the picture, since the Hemovore virus (responsible for turning humans into vampires, if they don't die from it first!) spreads through contact with fluids. So one day, things change when a mysterious person purchases twenty of Jonathan's paintings. Before Mark knows it, he and his vampire crush are on the run.

So I definitely give props to JCP for creating a relatively refreshing world, where a virus is responsible for the rising of vampires. Not only that, she managed to create a relatively humorous narrator (Mark), who pulled a few chuckles from me.

Unfortunately, that was pretty much it. And not even Mark's humor was able to pull me past the 60% mark. The pacing of the story really slowed down about 40-50% of the story. I got really bored at the roundabout way things were happening. At times, the main issue was pushed aside for the very mundane tasks that seemed to pile up endlessly (i.e. get more money, get more food, purchase more clothes, blah blah blah). Even upon skimming, I realized I had completely lost interest with the plot.

Then there's the romance. I just couldn't feel emotionally invested with Mark and Jonathan. Mark has a crush on the sexy vampire, but the vampire's feelings just comes out of nowhere. The chemistry between these two felt stagnant, and so I just...didn't care.

Probably not the best review out there, but what can I say? It's done, and now I'm ready to move on.